Komidia is No.2 of 4 in the Twilight series of prints and downloads. The Komedia, in Gardner Street in Brighton is a cinema and theatre venue.

The Komedia wasn’t always a cinema? Back in the 80’s it was the first £pound shop in Brighton (well. 50p to be precise) a cheap alternative to Woolworths. It was a walk around store set on 2 floors selling every knick-knack you could possibly want (and a lot of tat you didn’t) or need for 50p.
It changed hands in the early 90’s and was purchased by the good people of the Duke of Yorks cinema. Later becoming the Komedia. I have played here in a production with Voodoo Vaudeville with Chris Cresswell, seen some great bands here and danced the night away a couple of times.
So glad I was finally able captured the Komeida’s essence as a composition. 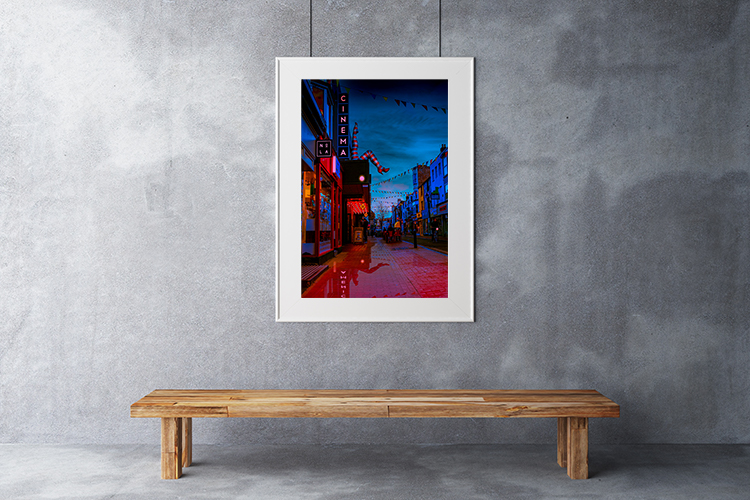 The ‘Twilight’ series came about because of the original photoI took on my phone of this capture or perspective. I later returned with my DSLR camera and waited for the light to dim and the Komedia lights to come on to get the shot. I have probably spend up to 50 hours getting this the way I wanted it? Edit after edit in Photoshop & Lightroom. Until I actually gave up. A few days later I looked at it and applied a gradient layer and solid colour mask to it and one final contrast adjustment in Lightroom and this is the result.

You can purchase Komedia as a Print or Digital Download

Pin It
I use cookies to ensure that I give you the best experience on my website. If you continue to use this site I will assume that you are happy with it.OkPrivacy policy