The fishermen know that the sea is dangerous and the storm terrible, but they have never found these dangers sufficient reason for remaining ashore.Vincent Van Gogh

A Great storm erupts over the West Pier with thunder clouds creating an electric tempest of awesome ferocity…! Well, that maybe getting a bit carried away, but I have seen some epic storms here in Brighton. Most notably the great storm of 1987. The one where the BBC weatherman Micheal Fish said in reply to a lady’s letter …”there is no need to worry about a storm tonight”.  He was just a wee bit wrong? He kept his job but never lived that episode down.

This print comes in A3 size on the longest edge. (Message me for bespoke sizes)

It was the night of the 15th October 1987, I was in the Zap Club, Brighton enjoying a Thursday night gig with my mates, completely oblivious to the strengthening winds and the driving rain out side on the sea front.
I think I may have drank a bit too much that night as I don’t remember a thing about it. It was what I call a ‘Walter Matthau’ moment. Check out the drunk guy (Mattau) in the 1974 disaster movie Earthquake.

The Day After Tomorrow

I awoke the next morning on the 16th and realised something was not quite right because the telly had no reception. I had a bad hangover and my mouth felt like the bottom of a bird cage.
The fridge had very little in it in the way of calorific value, or even if it was indeed food. So, I got dressed in order to make a trip to the corner shop in Poets Corner, Hove where I was living at the time.

Doc Martens laced, Levi 501’s buttoned, leather jacked zipped, I headed out the front door.
What appeared before me looked like the aftermath of a serious WW2 Tank battle? There were shattered tree trunks, bricks, rubble and smashed cars as far as the eye could see. There was absolutely devastation everywhere I looked.

I couldn’t quite take it in? Was I still asleep and dreaming this awful vista of Armageddon in from of me? Sadly not, it was no dream, but a waking nightmare that stretched out in front of me.

Everything was down, there was not TV because there wasn’t an arial, neither was the chimney that it was attached to only the day before. Electricity was out, telephones lines were down. Everything had come to a complete stop, just the distant sound of an emergency service vehicle’s siren in the distance. – For more on the Great Storm of 1987, click here

It took a couple of days for normal service to resume, Lewes was cut off, no public transport was running and most TV ariels were still kaput. Literally millions of trees were uprooted across Great Britain, the Level in Brighton was indeed levelled …but gradually Brighton and Hove began to recover.

My best mate Jez, the lead singer of the band I was drumming in at the time had  job with a local TV repair business, he came round and recruited me into delivering and installing new ariels with him, this went on for about a month and it made me enough money to buy a Ludwig Colosseum snare drum and a few cymbals for my drum kit. So, not all doom and gloom t the end of the day. There was light at the end of the tunnel and we all had a good story to tell.

Funny that even now 34 years later, I talk with people about this day and everybody remembers where they were and what they were doing. A bit of a Kennedy moment for my generation. Although, Was very drunk at the time. 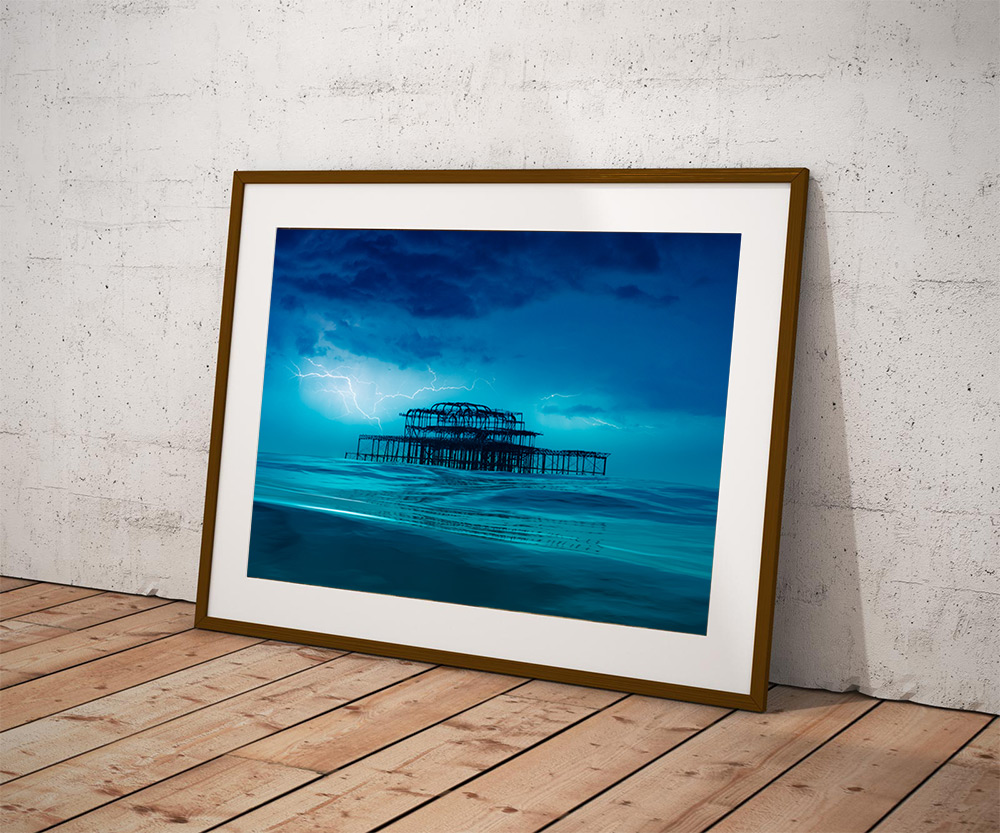 This photograph of the West Pier was taken with my professional camera in RAW format. I need to get as much resolution as possible from the iron work but needed to capture the shot from a distance. I wanted to create space and enough scope to get the dramatic sky in and enough scale to give the sea the wave which covers the whole bottom third of the composition.

In essence, when composing Storm, the old saying “Any fool can make things complicated, it takes a genius to make it simple” kept springing to mind! This was difficult to keep simple.

Yep, it’s blue? It’s very blue. Well, its actually a mixture of blues and shades of turquoise.
There is blue shade called Brighton Blue, and that’s what I was looking for to represent those memories of the great storm. Blue is what I use for shadows in most of my compositions, it works better than black as it gives more ambience when colour grading and channel mixing.

Pin It
I use cookies to ensure that I give you the best experience on my website. If you continue to use this site I will assume that you are happy with it.OkPrivacy policy