“How great musicians demonstrate a mutual respect and trust on the bandstand can alter your outlook on the world and enrich every aspect of your life, understanding what it means to be a global citizen in the most modern sense”.

As long as I’ve known the Bandstand in the Pump Room Gardens, I don’t think I have seen a traditional brass or  Salvation Army type band play in (or is it on)? it since I was about 4 years old. I’ve seen rock bands, Christian bands, hippy ensembles, and Samba bands, I have even played on it myself at the Leamington Peace Festival sometime back in the 1980s. But not the traditional brass band.  Not that I mind. The main thing for me, is this iconic Leamington Spa structure that everybody in the town knows about, has recently been restored and is still with us.
That can only be a good thing.

Opened in 1814 with the Pump Rooms themselves, to begin with, the gardens were only for the use of patrons of the Pump Rooms “to afford them pleasant promenades.” The original bandstand was later erected and bands played in the afternoon and evening during the summer (and other public holidays) for those paying to use the baths. During these early days, the famed tightrope walker Charles Blondin crossed the area in July 1851. However, in 1875 the gardens were opened to the public. In 1881 plans were made to build the town hall on the gardens but at the last minute a change of site was agreed and it was built further north near The Regent Hotel. In 1893 a pedestrian bridge called York Bridge was built over the river. The second bandstand was designed by Walter MacFarlane & Co and founded in Glasgow. It was installed in 1896. (Source Wikipedia) 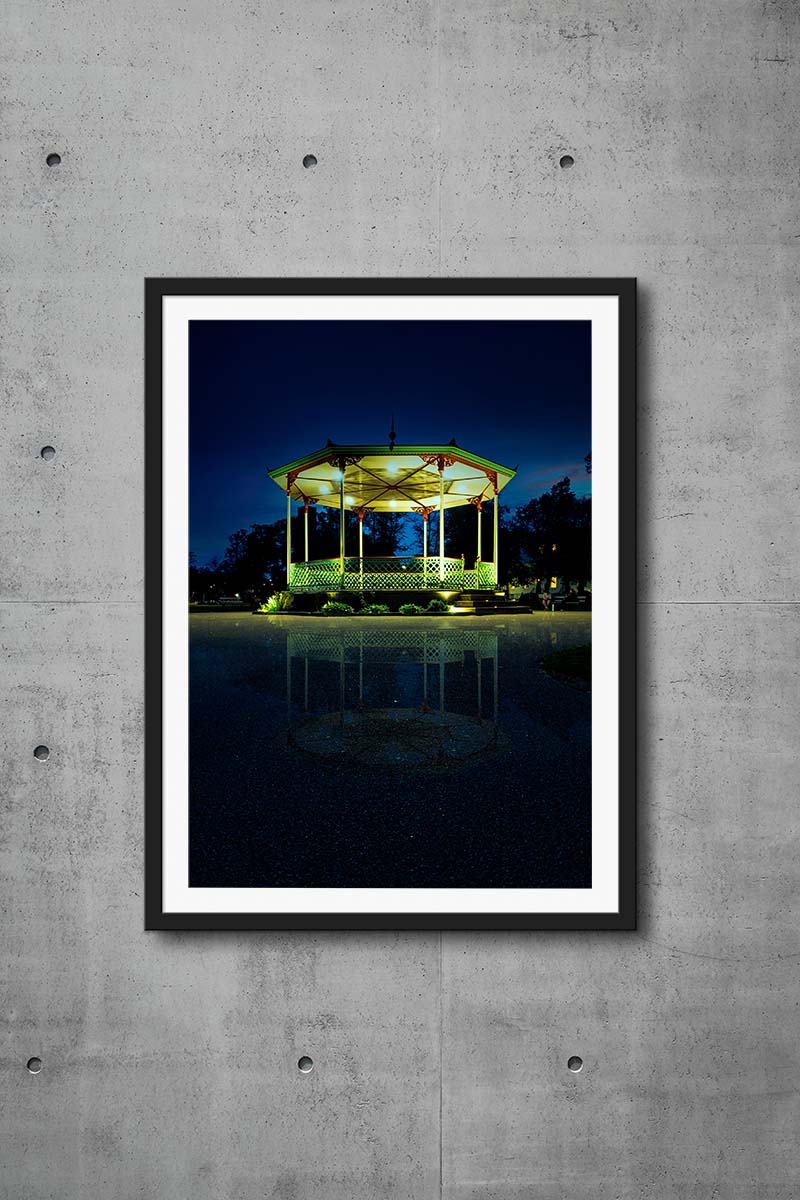 I originally planned to shoot the Dormer place walkway with the restored cast-iron lamps illuminating the autumn leaves but there were too many people and not enough leaves on the ground. As luck would have it, the Bandstand was lit up in the early evening darkness and looked absolutely splendid. I was not disappointed. I’ll return to Dormer Place in a week or so t capture the shots for my next planned composition.

This composition was a challenge and a half. First of all, getting the cemetery and the angle of the photograph, the balance and cantering of the beams, and the roof ornaments aligned. I got there in the end though and really happy with the perspective and angles.

Next came the colour and tonal dynamics! The bandstand was already well illuminated and at first, I was worried that the lights would cast halos, but didn’t have to worry. The bandstand wasn’t always green, it used to be a royal blue colour, I’m so glad they changed it. This green hue in the light is absolutely awesome. It was just a question then of enhancing the tonal levels to create enough contrast to make the reflection light up and the background to be made darker.

Hahnemühle’s authentic Fine Art paper is regarded as top of the line. It is often used for exhibitions and limited-edition art prints. All Hahnemühle papers have been certified by independent institutes to be highly resistant to aging and are vegan, in order to meet the highest requirements.