“Come, let us build bridges of love with each other with the cement of kindness and pillars of trust.”Debasish Mridha

Not exactly a bridge over troubled water, but it’s had its moments? It’s a calm place, just two bits of Leamington Spa joined by the Willes bridge on the Willes road. The road separates Welshes Meadow and Jephson Gardens, which back in the early 1800s was all called Newbold Common.

Here is the Wiki bit: The three-span masonry bridge was commissioned in 1827 to span the river Leam and its design is attributed to architect John Nash, architect to the Prince Regent, whose work famously includes Brighton Pavilion, Buckingham Palace and Marble Arch.

I have been under it, over it, jumped off it as a kid and often looked at it without ever knowing a single thing about it. That was until one day about 15 years ago. I got talking to an elderly fellow who was out on his daily constitutional. He’d often walk past the Leam Boat Centre where I was the then manager, stop for a cuppa and a chin wag.

A Bridge Too Far

He told me that when he and his mates were demobbed from the army after WW2, they all came back to Leamington with their bounty of German Lugar’s (standard issue pistol for German soldiers) and bayonets and other trinkets that they managed to get a hold of in the way of souvenirs.

The problem with this he said is that Leamington Spa in 1945 was all of a sudden a wash with young demobbed soldiers armed to the teeth with German weapons. There were quite a few drunken mishaps and enough Tomfoolery for the police to issue an amnesty to try and take the weapons out of circulation.

The Amnesty was for all weapons to be handed into the police station in High Street, this is now the site of the Leamington Spa Polish Club. The old man told me that the police had several post sacks full of contraband weapons at the end of the amnesty.

You are probably wondering “What on earth has this got to do with the Willes Road Bridge”? Yep, and you’d be right to ask. Well, …according to the old man, The weapons were all unloaded into the River Leam off the top of the Willes Bridge, into the middle, this is apparently one of the deepest parts of the whole river Leam.
So there you have it? Is it true? I don’t know, to be honest, I have never had the inclination to get dressed up as a frogman with an aqualung to dive in and find out. Either way, it’s a good tale and the old geezer told it with such conviction. 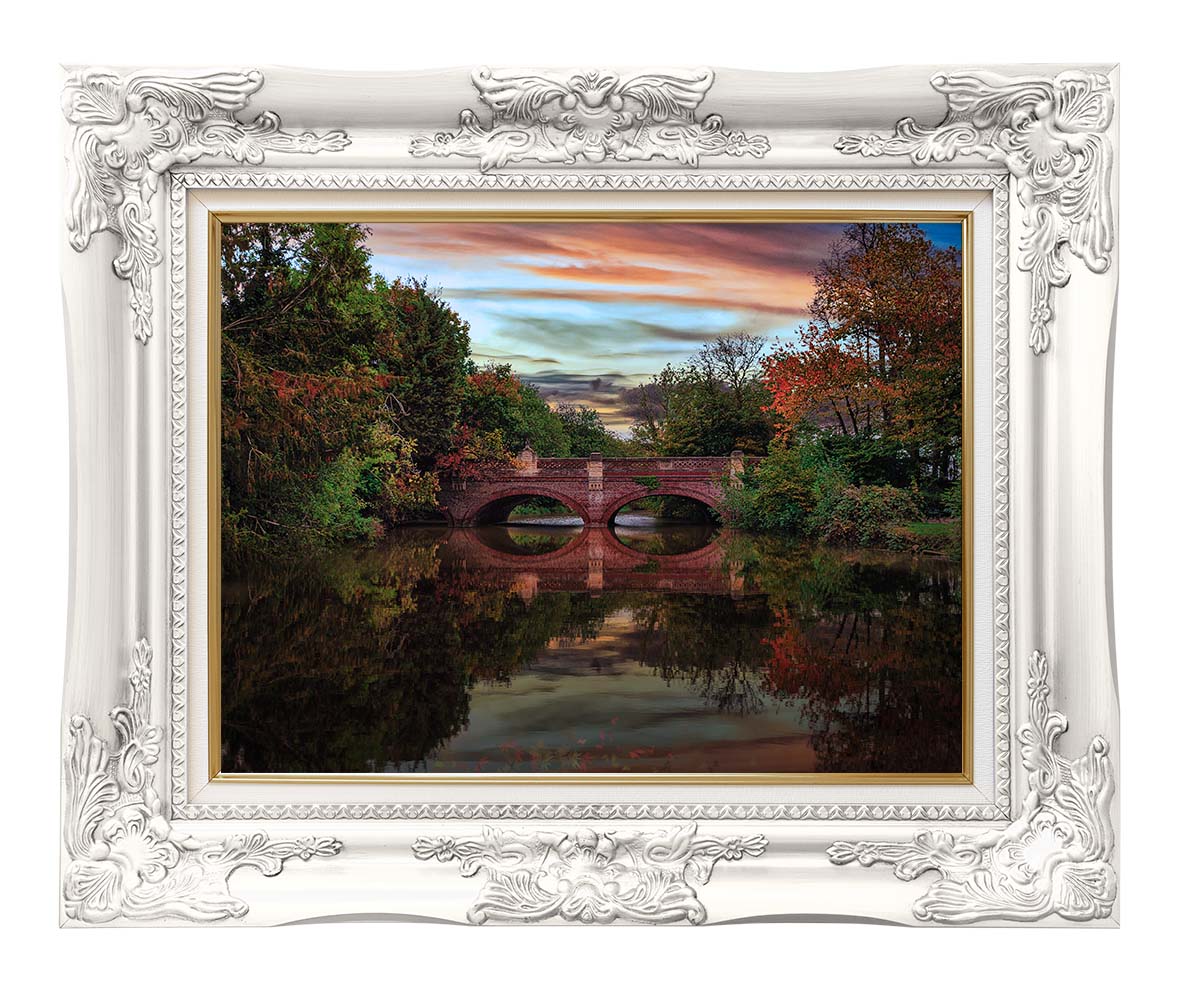 The idea was to get out into the river and get some shots of the autumn colours. This time of year is special for the gorgeous mix of reds, browns, golds and greens. I wanted to get to the other side of the bridge to where the trees meet in the middle, near Treasure Island. Anyone who knows the river knows the little island near Welshes Meadow.

I had a chat with Matt, the owner of the Leam Boat Centre, he said to take out a boat when I want to get some shots. So, I arrived at the Boat Centre and got into a Pedalo. A Pedalo is a perfect choice for photography on the river! It’s big, it’s stable and you can move around it, stand up and so forth without getting wet.

The Pedalo I chose seated 4 and had room for 2 to pedal! It needed two for sure. I’m a fit guy, I work out, I’m strong but I needed to be Olympic cyclist fit to take this trip work out. It was tough going, not only was the Pedalo humongous, but it was really windy. Every time I stopped to take a shot, I’d climb in the front, not wanting to get the bright yellow of the Pedalo in the shot. But by the time I’d line up the shot up, a gust of wind would turn the boat arse about-face. It was a struggle and a frustrating and knackering one.

I got to Treasure Island thinking “I’m not gonna make it back”? Both my knees and my back were hurting at this point. I’m 6’3, and that’s a bit tall for the optimum sitting position for the peddling. But I made it to where I wanted to get to. I took quite a few photos, but none really grabbed me. I knew I wanted a really good shot of the bridge, so after manoeuvring around the rive on the plastic Titanic, I managed (with the help of a passing Canoe) to straighten up and head back to the Boat Centre.

Finally, there it was, the vista that grabbed my attention? All the aches and pains suddenly disappeared. I could see the composition in front of me. So, it was snap-snap. And I got the shot that became ‘The Willes Bridge”

Once again, I’d like to say thank you to Matt and the crew at the Leam Boat Centre. Not only are these guys always helpful but, for years now and ever since I worked there so 15 years back, they have been dedicated to keeping this part of Leamington Spa and the river Leam alive and thriving. Matt and the crew provide an invaluable service to the Leamington Spa tourist industry, but I feel this is somewhat overlooked.

The Boat Centre plays a pivotal role in the South Leamington area, its provided jobs, training and careers for quite a few people, some of who now one their own leisure business’s. The Boat Centre hosts some of Leamington’s historic events too, like the annual Leamington to Warwick react race and other live events and remains to this day one of the best leisure centres of its type in the country.

If you are ever looking for family fun, a challenge, a bit of outdoor excitement and exercise, or maybe a new hobby, you can’t and won do much better than giving The Leam Boat Centre a visit.

Next, it will be to Matt’s other Boat Centre, Warwick Boats in St Nicholas Park, Warwick for some shots of Warwick Castle. …but with a difference. I think I may take a Canoe or rowing boat as the Pedalos in Warwick are shipped like giant swans.

No good shot comes by accident, not the really good one? You have to plan them, you got to have the inspiration, the motivation and the passion, or you just give up and watch Pointless on the TV.
I knew exactly what I wanted and I had to work for it. OK, I’m no martyr, it’s not exactly climbing the North face of Kilimanjaro to get a shot of a near-extinct baboon. It’s a leisurely trip up the river in a Pedalo. No drama. But I planned it, I executed it, and I’m satisfied that the effort has been justified with the final composition.