“The most important thing in life is to stop saying, ‘I wish’ and start saying, ‘I will’. Consider nothing impossible, then treat possibilities as probabilities.”
David Copperfield – Charles Dickens

Ifyou are going to capture a moment, you may as well give it some character and meaning? If you are going to capture something historical and forbidding, then give it an identity, a structure and a purpose.  Don’t just take a photograph and hope it comes out OK! Plan the composition, get into the spirit and the emotion of the history, of the building and of the events that it has experienced in its lifetime.
And that has and always has been my approach to photography.

A History of the Leamington Spa Town Hall

It would be easy to quote Wikipedia’s page on the Town Hall history for you here, but you may as well click the link rather than me copying and pasting the content into the page. I’d rather give you my personal history and what I remember about the Town Hall.

I was always a bit scared of this building as a boy, It always seemed to be dark, bleak, looming and oppressive. Now, I see it as a beautiful monument to architecture and feel mighty proud of it being the Town Hall of my home town. Strange how the things that scare you as a kid become a comfort to you in maturity.

My Aunt Sybil worked here in the 1960s, not sure what her job was, but I’m sure my cousin Polly will let me know on reading this. Polly knows everything about Leamington and our Roe family history, and I mean everything.

The Town Hall was also the site where the World Champion middleweight boxer and Leamington’s very own Randolph Turpin was cheered as he waved from the balcony upon his return from the USA after beating Sugar Ray Robinson. I grew up with the nephews and grandchildren of Randolph Turpin, the family is as much part of this town as the Town Hall itself. My father trained as a teenage boxer under Randolph’s guidance in the late 1940s before he became a Royal Marine and went off to Korea.

But most importantly and most historically significant; is that this was where my mate’s and I witnessed Benny from the epic and wonderfully acted drama series Crossroads lit a giant match to signify the annual switching on the Christmas Lights. Unfortunately, though, a chunk of the giant Swan Vesta match broke off and landed on some poor kids heads. No injury suffered, could have been quite bad, but he laughed it off. I doubt that the Health & Safety Police would allow such a thing now.

I’m not sure what happened to Benny from Crossroads? Such a fine actor, he put Lawrence Olivier, Charles Laughton and Peter Ustinov in the shade. You never got the likes of Ustinov & Olivier switching on the Leamington Spa Christmas lights, …just not as good an actor as Paul Henry’s Benny. I think he deserved a multitude of accolades, but Crossroads was sadly cancelled. 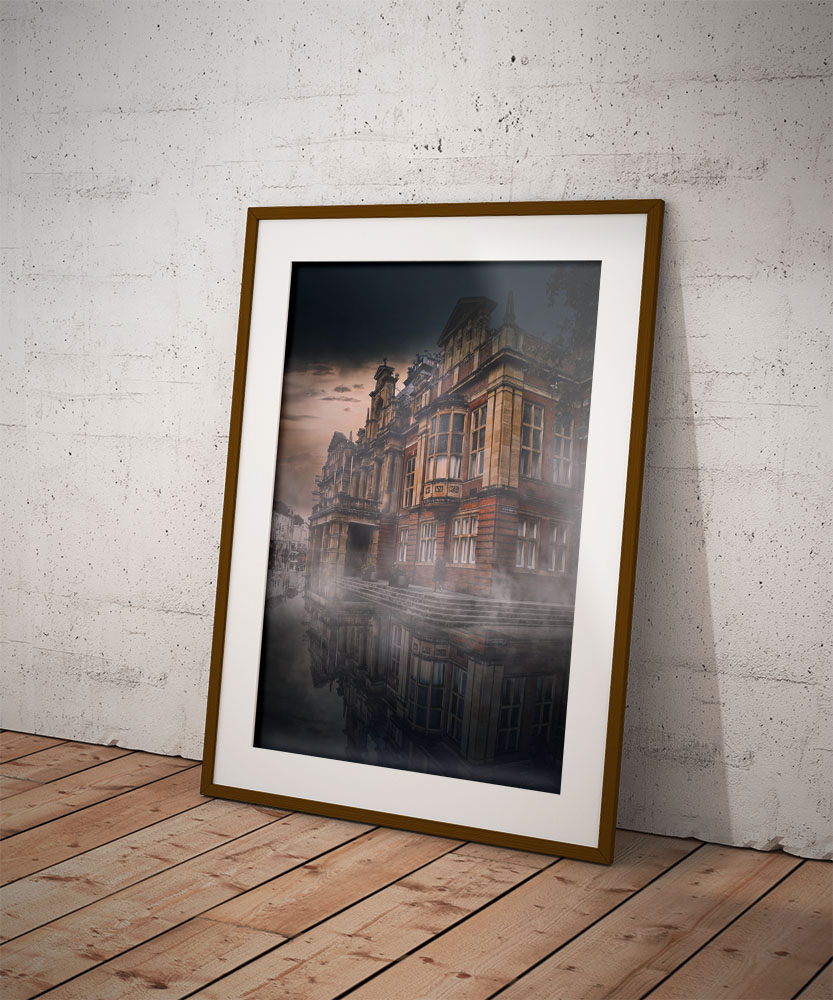 I worked the Town Hall composition from a number of angles, I had to really, as this is not the easiest building to photograph. The other side of the road on the Parade was too close, even for a wide-angle shot. My GoPro would have been able to capture a fish-eye shot but the resolution would not have been high enough. I also wanted the shot to be in RAW format and not JPG.
I ended up taking this photo with my Google Pixel 3XL phone. I had to stand in the road, in passing traffic (to the annoyance of the local taxi drivers) but ended up with the perspective that I knew I could work with.

I wanted that looming and forbidding perspective, the same I felt when I was a small child, so had to get down low and point the phone upwards in order to get the best angel.

I love the Dickensian look and feel, but I’m using the mist and fog instead of the rain like I did in my composition ‘Dickensian“. Just working with the multi-layering of the atmospherics to me is as exciting as a night out on the lash (well, it would be for me as I don’t drink alcohol).

There are a lot of layers with this composition! You can’t just whack a load of mist and fog and reflective surfaces into a composition without gradually introducing depth and luminosity. This has to be done incrementally and in slight density differentials as the layering builds with each layer varying in opacity and masking. I think the end results were worth the patience and persistence.